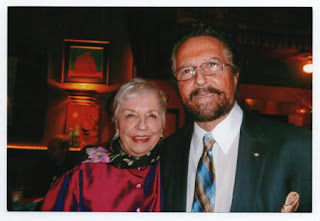 
The surprise is I hadn't realized how long it's been since I posted, but the last entry is dated nearly a year ago, July 17, 2017.  I haven't been ill or idle or experiencing (much) writer's block. The plain fact is that in a forced switch to a newer, presumably more efficient AOL e-mail technology, the loss of my entire mailing list was a nightmare come true. We tried everything, and even my miraculous tech assistant was unable to retrieve the valuable subscribers. After much gnashing of teeth and fists directed sky-ward, I quietly found The List last night. They don't call me "Ole Tenacious Sloane" for nothing!  I slept the sleep of the redeemed.

I completed various writing assignments during that agonizing search period, including liner notes for my good friend Daryl Sherman who has a new release on the Audiophile label, a terrific set of songs on a CD called "Lost In A Crowded Place". Needless to say, it was a pleasure to contribute to this endeavor, and I hope you will sample the work as well.  (Love the hat, Daryl). 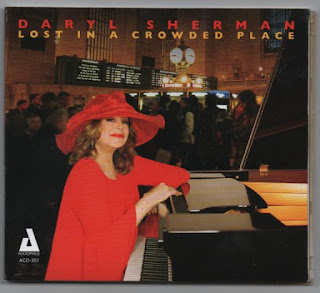 These are my closing remarks in the booklet:

"Daryl is the quintessential seeker, finding immense pleasure probing the oeuvre of America’s most beloved and respected composers. One would think there is little left to discover, but Daryl’s tenacity and perseverance once again find the archival equivalent of 18K gold. A quick glance at the titles will inspire our shared delight in the joy of hearing melodies and lyrics which have been hiding in the shadows. And we needn’t make any effort at all. Daryl has done all the heavy lifting for us, and quite skillfully too. All we need do is sit back and savor the fruits of her research as the generous gifts they are. Let us safely assume Daryl will continue to locate many more gems on her endless quests into the countless unopened or forgotten treasure chests of American popular song. We can but live in eager anticipation."

I was also asked to write a review of a new book about Mark Murphy.  Here is the cover and the review: 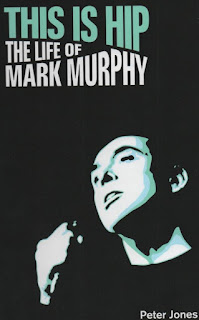 Mark Murphy once said: “You can divide your life into two parts: Before Jazz and After Jazz.  You had a life before Jazz, but once you heard Jazz, you knew your life would never be the same again.”   It is the truth.

That statement and much more concerning  Mark’s philosophy about jazz and his indelible, significant interpretations during live performances and on recordings, is revealed in the new, meticulously researched volume called “This Is Hip – The Life Of Mark Murphy” by British jazz singer and journalist Peter Jones.  (www.equinoxpub.com)
Mr. Jones is a most devoted fan, but he doesn’t shy away from discussing some of Mark’s more ferocious vocal characteristics which caused more than a few (myself included) to relinquish our fan club membership.  Evidence of Mark’s nascent, vibrant talent and his eventual aggressive vocal gymnastics are to be found in the extensive discography, meticulously referenced in this new valuable testament to one man’s vocal vision.

I feel certain I must have heard Mark’s 1964 album called “Mark Time” released on the British label Fontana.  I know I saw him on late-night television shows of that period, probably those hosted by Steve Allen, a sand lot pianist at best, with a fervent appreciation for jazz, who was especially fond of good pop singers.  He happily nurtured many strong voices of the period such as Steve Lawrence and Eydie Gorme, so I’m sure he would very much have enjoyed presenting the young, promising jazz singer Mark Murphy as a guest on more than one occasion.
I remember being impressed with Mark’s richly textured voice - a jazz voice, a swinging voice, an intelligent voice - which mesmerized me.  And I remained faithful until …

Until, over the years, Mark’s inventions and explorations took on qualities similar to the screech of an owl in extreme distress.  However, I remained fascinated by his audacious improvisational skills more often than not, even though I began to feel profoundly uncomfortable and bewildered.    My respect for Mark’s strenuous determination to reshape firmly established melodies suggested vocal anarchy to me, disconcerting and as dangerous as attempting a full-scale, no-safety-net-in-sight assault on El Capitan.  More plainly stated, my aversion to scat singing intensified, unless ...

Unless, of course, it took the form of the delightful high-wire arabesques performed by Ella Fitzgerald or Sarah Vaughan, both of whom transformed themselves into saxophones or trumpets when scat singing, and always with consistent, fastidious grace and musicianship.  Ella’s singing in particular expressed the joyous elements of jazz improvisation.   Her ability to sing “in the pocket” is to me the essence of vocal swing which, by the way, is also the defining component of jazz singing:  One whose "placement" is on the beat, able to improvise the lyric with a musician's fluency within a written measure*.   But, I digress.
Mark Murphy’s more adventurous work inspired me to examine the works of  musicians whose perspectives were also free-wheeling, controversial and thought-provoking, including Archie Shepp, early Sonny Rollins and John Coltrane, giant sax players who established new concepts based on the lyrical platforms solidly erected by Johnny Hodges, Lester Young or Coleman Hawkins.

Without Mark Murphy, though it may seem strange to say, I’d have quickly turned a skeptical eye on Salvador Dali or the fantastical works of  Hieronymous Bosh.   However, I always admired Mark for his daring, the feeling that he found himself in an impenetrable jungle through which he could confidently forge a new path.  Mark was an artist willing to challenge himself at every turn, whether or not we were able to accept that the roller-coaster ride he asked us to share would be fun!  It was not in his nature to compromise.
I very much identify with these words he once spoke: “… the gold is when you reach maturity … you begin to sing your life.  You’re not just performing.  You’re putting your life into your songs.”   I believe Mark’s life was brimming with vivid color, genuine compassion, delicious humor and gentle spirituality.

“This Is Hip – The Life Of Mark Murphy” tells us that Mark Murphy clearly resonated with Mr. Jones from the start, and his beautifully researched book expresses his perpetual devotion to and fascination with the man in all his uniqueness.  He objectively addresses the portion of Mark’s life which exemplified his inquisitive nature and daring-do approach.  Many of us didn’t get it some of the time, but Peter Jones did.  It’s a lovely book, affectionately dedicated to an authentic, much admired jazz innovator.
-Carol Sloane
* Exquisite examples of singers with perfect "placement" are the late Maxine Sullivan, and the marvelous Catherine Russell, very active today and delightfully swinging always.
My book recommendation for July:
"The Complete Patrick Melrose Novels"
by Edward St. Aubyn
* * * * * * *
A singer of enormous ability passed away
June 17th following
a brief performance on Cape Cod
Beloved and admired by New England jazz fans and beyond,
SloaneView marks with sadness the loss of
Rebecca Parris.
R.I.P.
* * * * * * * * *

Thanks for reading. If you wish to update your email address, or just want to be left alone, please give me the pertinent information at Comments.
-Sloane

I'm glad to see you back and I always find your different musings entertaining and informative. I learn about jazz artists I've not heard of before and I love discovering them.

Now, when will you be coming to Seattle to perform? :-)

I always appreciate an author who presents an objective view rather than subtle undertones of bias. Hence I enjoyed reading your presentation because it was well written and maintained a clear focus. Mark Murphy is relatively new to me, but honest and truly, I can not be counted as a fan. It has nothing to do with rejecting avant-garde approaches such as was his heavily stylized interpretations, but all to do with putting one's emotions so far above the written material of the composer and lyricist that their work is virtually unrecognizable. This can't be said of Rebecca Parris. No matter her variance of the melody or the wording, she emulated an ardent respect for those who wrote the material she had chosen to sing. It has nothing to do with sticking to the notes. When Rebecca took on a song, you knew she got it right.

I am glad to read you Todd, and Tom too. I knew Mark Murphy, and I always admired his audacity. In fact, I envied it, a quality I'd never have entertained, with everything I knew of jazz singing coming directly from Ella, the gentlest of women.

Speaking on Ella, I notice she, Carmen Mcrea, Sarah Vaughn and Mel Torme were among the famous performers who were known for their scat singing. Personally, I am not a fan of scat performances, but neither can its appeal be denied as this type of singing is welcomed by many of the great artists. Judging from the audience's reaction to this type of singing, they relate to it in a way I am unable to appreciate. When a vocalist imitates a musical instrument, there has to be some kind of a satisfaction from it. In my opinion the song becomes an instrumental and not a vocal number. What am I missing?


Off to check out Mark Murphy, with whom I was previously unfamiliar. Thanks, Carol.