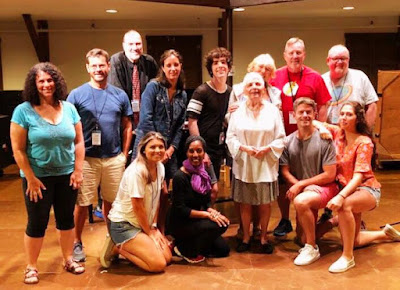 I look a little like E.T., I know,
but I wasn't the star of the show.
These singers were so much fun to hear!
Thanks once again to John McDaniel
and the entire staff.
You made me feel so young!

The Launchpad of American Theater, the O’Neill is the country’s preeminent organization dedicated to the development of new works and new voices for the stage.
​
Founded in 1964 by George C. White and named in honor of Eugene O’Neill, four-time Pulitzer Prize-winner and America’s only playwright to win the Nobel Prize in Literature, the O'Neill has launched some of the most important voices and works in American theater and has revolutionized the way new work is developed.

From its campus in Waterford, Connecticut, the O’Neill has been home to more than 1,000 new works for the stage and thousands more emerging artists. Writers, directors, puppeteers, singers, students, and audiences alike take their first steps in exploring, revising, and understanding their work and the potential of the theater they help create. All focus remains on the writer and script: Performers work with simply rendered sets and costumes, script in hand, revealing for the first time the magic of a new play or musical, puppetry piece, or cabaret act.
​