Dave, Bill and Carol, Sybil and Adam and the other Dave ...

And now for the really exciting news! 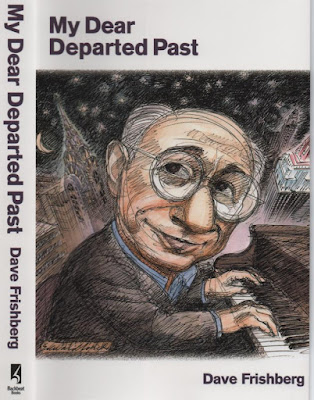 Let me be among the first to tell you of the publication of Dave Frisberg's memoir "My Dear Departed Past", Hardcover, Backbeat Books, at Amazon, wherever books are sold and also https://www.davefrishberg.net/.  The great man generously explores, explains and even reveals the causes for revising the texts whenever he felt it necessary to do so.  He cites many of his most endearing lyrics, including "Peel Me A Grape", "Van Lingle Mongo" and "The Sports Page", just to name three.  He also tells us how and why he wrote them, the kind of information we've all been longing to know.

A stroke in 2014 knocked the wind out of his sails, more from the shock and surprise of it than its level of intensity. According to his wife, April Magnusson, the stroke occurred during the night.  He had been exercising  at the gym on a daily basis, and had been there the previous day.

The good news is that although there is some loss of memory, it is "spotty", but there is much he remembers. April says: "He cooks oatmeal for us every morning, and retains every bit of his keen sense of humor.  He does not do much emailing, so it is best to email me at aprilmag@aracnet.com if anyone wants to send him a message."


The book is often revelatory, informative and filled with people and places that will evoke warm memories for many who read the book. "My Dear Departed Past" is an essential addition to your jazz library.

P.S.  Once Dave and I stood on an Amtrak platform at Back Bay Station in Boston, waiting for his Acela train to New York.  He turned to me and said: "Carol. Your coat is hip".  This from the hippest man on the planet.  I was thrilled.  The coat was old as well as cool, and still hangs in the hall closet, proudly bearing the coveted Frishberg Seal Of Approval.

P.P.S  With an aching back to prove I've been bending down, climbing up and generally poking through boxes of photographs in my so far futile attempt to locate a cherished photograph Dave sent a long time ago, I am forced to describe it for you instead of actually posting it.


It shows Dave seated at the piano, fingers on the keys, his first-born son in his lap.  The child is looking directly at the camera with a slight, somewhat bemused smile.

No matter when I find it (and I will), I will show it to all of you.

In the latter part of June, I experienced visceral elation inspired by the people and places I visited, viz: On June 23rd, I boarded a Porter Airlines flight from Boston to Toronto to acclimate myself in preparation for my engagement the following night singing with the pristine, eloquent piano accompaniment of the brilliant Bill Charlap.  I know this duet setting intimately because Bill and I have embraced this format several times in the recent past.  See our our Jazz Standard gig here.

However, on the night of June 23, I sat in the audience at The Jazz Bistro, a comfortable, beloved venue (one of the best of its kind in all the world), listening to Bill and his equally amazing wife Renee Rosnes display their combined prodigious skills.  Ah, jazz! Ah, jazz at its most delicious. Jazz as pure, dazzling art. Jazz in all its glorious, concentrated form.  Jazz with its complexity and generosity of spirit.  As a fan, my presence was rewarded a hundred fold.

Here's a picture of Renee and Bill during a typical duo presentation.  Bill and I share a running joke that they should hire a small, quick-footed child to sit under their feet, prepared to run back and forth under these giant instruments to alert the other of an approaching change of tempo or key modulation. 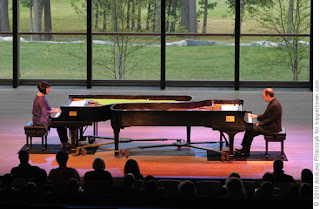 I was seated at the corner of the bar, and my perch also gave me the opportunity to witness another artist at work, namely the Head Bartender David Belsey. This man possesses a graceful and totally silent technique.

You have probably been subject to one or more of those dreadful incidents when the introspective mood has been shattered by the sound of ice cubes falling from a metal bucket into a steel-lined bin, dropped from a height of six feet by a numb-skull hired to mix drinks and the music be hanged.  "Oh? There's a performance going on?  Who knew?"

My friend Belsey would have none of it, thank you very much.  He carefully selects the proper glass, holds the metal shovel-like instrument above the open ice chest, opens and closes doors silently, and suspends all motion during those moments when the audience is fully involved with the artist's endeavor. Often, he just stands there, waiting for just the right second to resume his work. It's another show just to watch him perform his delicate choreography with such style.

The Jazz Bistro also employs another superb expert who manages the sound system.  He's Adam Cree, a meticulous and devoted audio technician who sees that the artist looks and sounds his or her very best. And he will stay at the task until and only when he and the artist sign off.  Awards of some sort should be created for Adam and David.  Bravo gentlemen.  You are The Best.

Mr. Cree and Mr. Belsey have been instructed to perform their assigned tasks the way they do because The Boss long ago established this policy, building loyal audiences who come to The Jazz Bistro to enjoy the music in an environment free of extraneous distractions.  At The Jazz Bistro, you will not ever be seated beside a table for twelve, celebrating Uncle Saul's 88th birthday complete with party hats and lusty choruses of Happy Birthday.  Thanks to Sybil Walker (she's The Boss, otherwise known as the heart and soul of the club), an evening at TJB is meant to enrich and nourish your jazz soul, and it succeeds every time. Congratulations and thank you Sybil for your tenacious devotion to jazz.  Another Award, if you please.  Oh yes: the food's great too.

Oh Carol, wonderful post! I will buy Dave's book for sure.

Just looked at their website. Gosh, that IS a fabulous club.

I want to live right there. Maybe they could set up a little cot for me, right underneath the bar. I won't make any noise, either!

Nice to hear from you both. The Bistro web site actually shows the upstairs area which decor indicates it is not the listening space. The street floor of the club is where the entertainment is. Upstairs, though very beautiful, is set up for drinks and conversation.

splendid reminiscences Carol. And everything you say about TJB is spot on. One of my favorite jazz memories is seeing you in Toronto on 2 consecutive nights the last of which was graced by members of the Count Basie Band who were touring and sat in with you....sheer heaven!!

Paul ... How nice of you to remind me of that night with the Basie guys sitting in at what was then The Top o'The Senator. Yes, yes. Well, I have a cherished history with the room, and feel happy when I'm asked to appear there.

Frishberg's book is a doozy, by the way. You will love it.

and, BTW...You autographed my copy of your "Love You Madly" cd, "For Paul, my Toronto love, Sloaney"...a treasured possession!

i am looking for website development Australia can you suggest me a better one??