The Latest News And The Loss of a Passionate Jazz Scholar

Here's where you'll find me in the near future:

*  No, I'm not singing with Bill.  Just want to make sure you mark his date as a "MUST".  I will be in the audience, so I say that counts as one of the places where you'll find me in the coming months.

Gary Shivers and I, seeking funds during a drive at WUNC in Chapel Hill, in the early 1980's 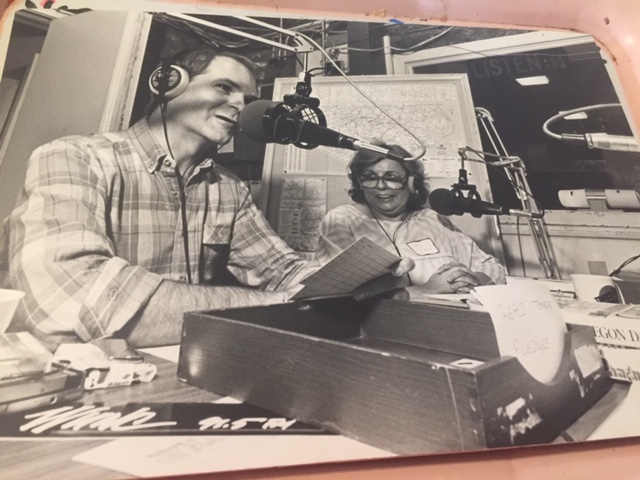 On February 2nd this year, a jazz scholar you never heard of quietly passed away without fanfare.  Those of us who loved and admired him were not shocked because he'd been ill for such a long time.  We all cried genuine tears of sadness, tears blended with a sense of relief as well because we knew he was no longer suffering.  Here are some of my fondest memories:


I remember the night I met Gary Shivers at a club called The Frog & Nightgown when it was located in the Cameron Village Subway in Raleigh.  He was new to the Triangle having just become General Manager at the NPR affiliate WUNC-FM, broadcasting from cramped studios on the UNC campus. In addition to his administrative responsibilities, he inaugurated a Saturday morning program called “Gary Shivers On Jazz”, from 11 AM to 2 PM.

At The Frog that night, he told me, with a broad smile: “I have all your albums”.  I was quite impressed because there were only two at the time, gathering dust in all sorts of unknown places, but obviously not at his house.  His compliment was genuine and sweet, and predictably we became best friends, sharing our love of jazz, good food, pretend vintage wine and classic black & white movies.

After he left North Carolina to return to his birth place, we enjoyed marathon phone conversations between my home in a Boston suburb and his digs in Kansas City. These precious link-ups continued until the last one, about two weeks before he died.  Over the course of time he had shifted his focus to classical composers, having lovingly archived his enormous vinyl and cd jazz collection in a sort of cryonic state, maintaining his passionate focus on music, but now from Bird to Bach.

I can tell you with vivid memory that at precisely 11 AM every Saturday morning, I could hardly wait to hear what the opening GSOJ sounds would be: Five minutes of Sonny Rollins?  Phil Woods? Thelonious Monk? Bob Brookmeyer? And then his soothing, gently authoritative voice identified the artist, telling us why it was important that we spend the next hours enjoying and learning as he explained with undisguised glee when the recording was made, who all the sidemen were, who wrote the arrangements, how the musicians interacted, and whether it was raining that day … well, you get the idea. It gave him enormous pleasure to share his extensive knowledge with his loyal Saturday morning audience.

After three full hours of inspirational, fascinating, extraordinary improvisations, made easier to comprehend because of his concise explanations, one came away enlightened and refreshed, always wanting more.

“Gary Shivers on Jazz” awakened neophytes, satisfied die-hards, and nourished thousands of starving jazz fans in the Triangle. May I say, without Gary Shivers, the lines of devoted jazz fans outside the doors of The Frog & Nightgown in Raleigh, or Stephen’s, After All in Chapel Hill would have been significantly diminished.

When I drove into my parking space yesterday, I spotted the pair of morning doves who call to each other every morning outside my bedroom window.  They were engaged in gentle fore-play, preening each other, and eventually kissing.  I was fascinated to see the stuff of television nature programs, and didn't have anything better to do anyway.  Eventually, this activity signaled she was ready to mate, and he accomplished the act with lightening speed, quickly returning to his position beside her.  She seemed decidedly unimpressed with his performance, and hurriedly flew away, presumably to shop for baby clothes. He, on the other hand, hung around for few minutes, visibly congratulating himself. 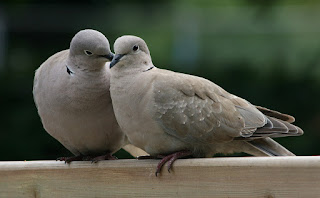 "Gertrude.  You know you're the only one for me."

Here's a sweet memory: It's near the end of 1967.  I am at my hairdressers at Revlon in Mid-town Manhattan when word sweeps through that Barbra Streisand has just arrived, and it's "Everyone on alert and at the ready".  My man, Mr. Edward, becomes slightly crazed, and begs me to arrange a meeting for him.  I haven't seen Barbra since our initial meeting in 1962, when she came to hear me sing at The Village Vanguard.  She did not identify herself, wore jeans and a t-shirt, with no sign of a purse.  I had no idea she was stopping the show every night playing Miss Marmelstein in the Broadway hit "I Can Get It For You Wholesale".

I do remember she asked "How do you do that"?, referring to those few improvisational elements which were becoming part of my developing style.  We talked about that, and I told her how jazz singing was my life's dedication, happily trailing along behind my favorite legendary jazz singers Carmen McRae, Ella Fitzgerald, Sarah Vaughan and Billie Holiday.  Ours was an amicable chat, and away she went.

Because I didn't want to disturb her while she was being beautified, I decided to send a note into her private room at Revlon.  She flipped the note to write her sweet response on the reverse, and it was delivered to me in the midst of my own beautification: 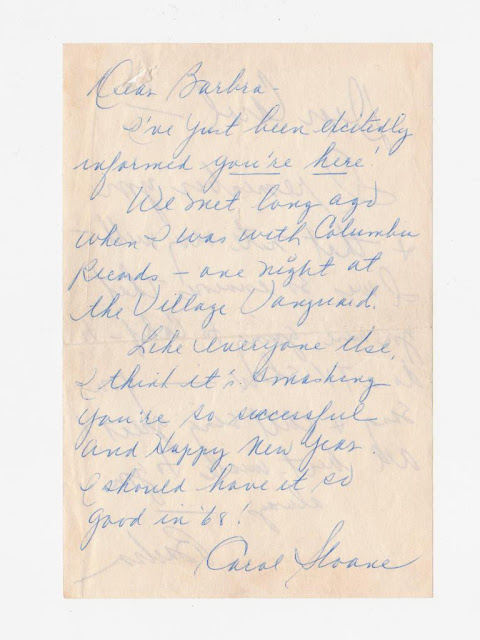 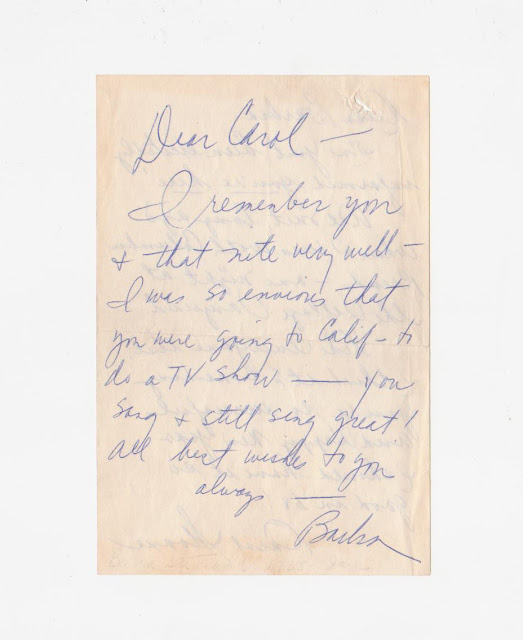 Love the part about how she envies me a trip to LA!