I am at this moment listening to her perfect voice thanks to a mini radio tribute designed by WQXR radio host Jonathan Schwartz.  In fact (shame on me), I almost forgot her birthday.  She would have been ninety-eight years old today, and in two years' time, we will all be celebrating her centennial anniversary.   I have very precious memories of often being in her presence during the late 1970's when Jimmy Rowles became her accompanist after Tommy Flanagan relinquished his lengthy tenure.  I went along on a few of those tours to help Jimmy find his socks, and even helped zip Ella into her gown a few times.

I was in the wings for one of her more unforgettable concerts.  She usually wore high heels, and one night during a performance, one of them became lodged between the boards. While she wobbled somewhat precariously, her bass player Keter Betts, noticing her distress, tried to get Jimmy's attention, but he was new on the job, and was peering intently at the music.  In a loud stage whisper, Keter was practically shouting at Jimmy who finally looked up, saw Ella's predicament, leapt to her side, knelt down, grabbed her ankle and started to pull.  With heroic effort, he managed to release her foot, and beat a hasty retreat back to the piano.   Through every second of this Chaplin-esque routine, Ella never stopped singing.  She received a well-deserved standing ovation, and so did Jimmy when she turned and invited him to share in the applause.

Though I have told this one on more than one occasion, it always pleases me to remember the moment as if it happened yesterday.  We were sitting together in a VIP lounge in some European airport.  I simply HAD to ask: "Ella - Is it possible you have a favorite song to sing?"  Without a flicker of hesitation, she replied: "Oh yes", and began to sing the verse to Billy Strayhorn's "I Want Something To Live For".  "Do you know it?", she asked. "Yes, I do", I said, and then we began to sing the rest of the verse and the chorus together. Now, not many people have had that experience, I'll wager.


This a photograph of a small but elegant party given for Jimmy on the eve of his departure on his first European tour as Ella's accompanist.  L-R: Bob Brookmeyer, Jimmy, me seated beside Tommy Flanagan.  Photo on the piano is Jascha Heifetz, a friend of our hostess. 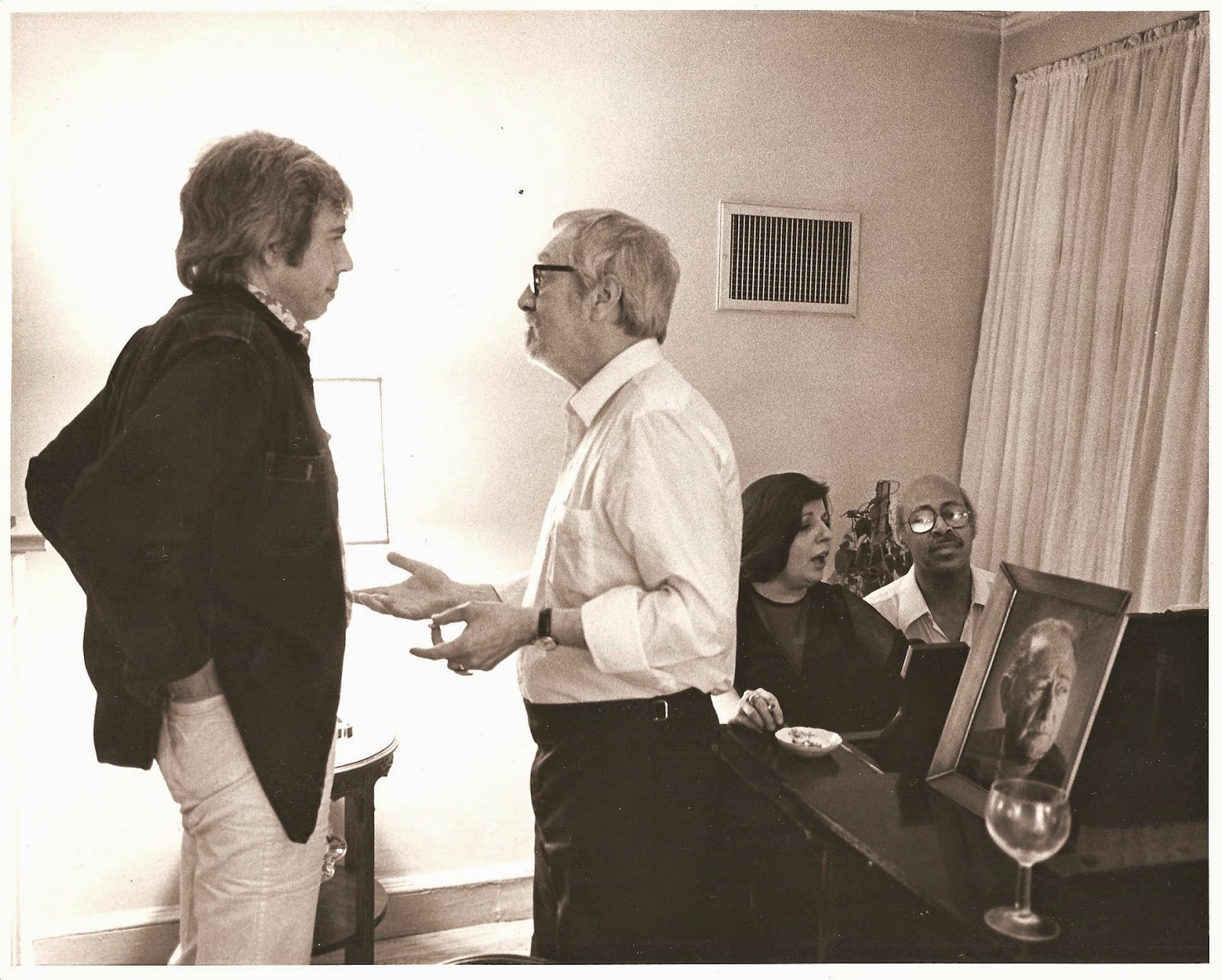 I love reading nice things about people I admire. Ella reigns supreme. No one like her.

The photo that accompanies the story is marvelous on so many levels. How evocative and poetic are the two groupings: a couple of men deep in conversation, set off by the singer and pianist at work, obviously loving the moment.

And what better angel to oversee it all than the great Jascha Heifetz?

Happy Birthday, Ella. We all look forward to 2017.

Thank you for sharing this wonderful moment, Carol Sloane.

Paul Lambert. Just found pictures of you and us when you were singing Scullers in Cambridge Ma. in April 2000. Friends of the Norths we are. My email is paullam7@comcast.net.