HERE SHE IS, TOTALLY IMMERSED AND OBLIVIOUS TO ALL BUT THE LYRIC. 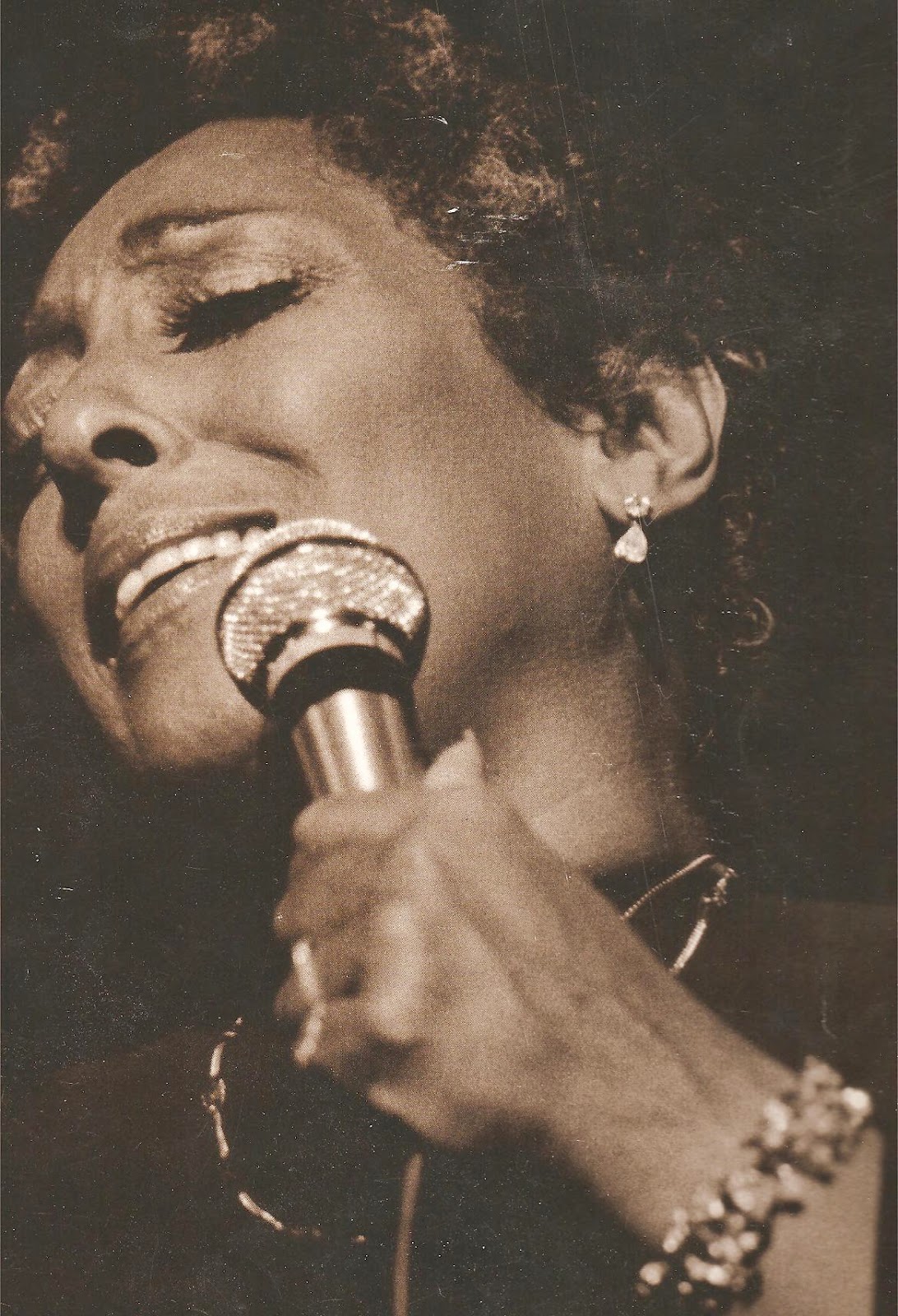 This a brief but deeply affectionate remembrance of Carmen McRae, a modest tribute on her birthdate. No discography or scholarly discourse about her vocal technique, vast repertoire, skills as a pianist, or her notoriously volatile personality.  (Speaking of which, I stood in the direct line of fire at least twice in our long relationship.  She once cut off all communication with me for over a year because I forgot to fill an ice tray taken from the freezer of her refrigerator).  But we remained fast friends in spite of it all up to the end of her life.

Carmen was born on this date in 1920.  I will always remember her as my girl friend, confidant and Sister Singer Superior.  We shared many hours together at her home in Los Angeles, or at her gigs in New York, Boston, Washington, D.C. and other American cities.   The focus these past few days has properly highlighted Billie Holiday's centennial commemoration with reams of print recalling her rise to fame and tragic life.  None of us will ever forget her sound or her influence, especially Carmen, her most ardent admirer.  She once told me that if Lady Day asked her to jump out the window of a thirty-story building, she'd have flung her life away without regret.  In a much less exaggerated form, that was the sort of devotion I developed for Carmen myself over time.

We often spoke on the telephone, usually to chat about the latest plot twists on "All My Children", a favorite soap opera she watched faithfully.  (It's common knowledge that Ella Fitzgerald was also addicted to her "stories"). Carmen was so loyal she had a satellite dish installed on the roof of her home in Beverly Hills so she could watch the show in EST, not forced to wait for the three-hour West Coast delayed telecast.  I watched it too, but only because she did.

Often, she liked to call from some city on the road to describe the latest less than adequate hotel room accommodations or highly over-rated, sometimes non-existent amenities, snarling the whole time, until eventually we were both howling with laughter.  I once bought her a phone jack with the longest cord I could find because one such call began this way: ME: "Hello"?   CARMEN: (shouting): "Girl! Can I just tell you about this &*@$-ing hotel where the phone is on the OTHER SIDE OF THE ROOM!!!  ... nowhere near the bed where it's supposed to be!!!"  She'd  continue her diatribe, describing numerous other transgressions with unreliable room service or imbecilic chamber maids who knocked in spite of a DND hanging on the door knob. When she called, she never asked if it was an awkward moment, or if I was otherwise occupied. She usually didn't even identify herself.  She'd just launch into a flamboyant tirade, but at the end of the call, her mood was predictably less bombastic.  She probably gave a better performance that night too because she released all that tension with an eye-popping imitation of Mt. Vesuvius.

It was 1988.  I was in New York and can't remember why.  I called her hotel to say goodbye before taking the train back to Boston.  She said:  "You mean you don't want to come to my record date this afternoon?" And that's how I came to bear witness to the studio sessions which completed her ambitious, daring, and subsequently definitive essay of songs never meant to be sung: the music of  Thelonious Monk.

In this valuable YouTube video of her Montreal Jazz Festival appearance in 1988, she sings several Monk compositions with her usual flair, at ease with perhaps the most abstract and complex melodies only she would have had the audacity and skill to challenge.  It's well worth your time to watch Carmen at play, so to speak, because she is in her element here, a glorious thing to see.  She's working with her hand-picked trio: Eric Gunnison piano, Scott Collie bass, Marc Pulice drums.  Clifford Jordan's majestic tenor sax is the perfect embellishment.   Sit back and enjoy this most distinguished artist, my girl friend Carmen.  I'm going to watch it with you, and remember her with never-ending admiration.

What a lovely tribute to a wonderful lady.
I think she would hug you for that, were she still here.
<3 <3 <3

Fantastic! Thanks for enlightening me about her work.

Not even knowing it was Carmen's birthday, somehow I was listening to her recordings this morning, including portions of the Montreal performance you share in your post! And then I see your beautiful tribute to her. You made me smile with your stories of your connection with her. Looking forward to watching and listening to the full length video. Thank you, Carol!

Great Tribute and wonderful reminder of my Best Drop-in Memory. At age 84 its hard to remember the exact year but after a concert in London UK. She dropped in to see Max Roach &CO> at Ronnie Scotts. He did the twisted arm bit and got her up for a song which lasted for a half hour in which she blew the place apart. Magical? You Bet.

Thank you for sharing this, Carol. Carmen was one of my favorite singers. I only got to see her perform twice: once at a free(!) outdoor concert in Portland, OR and once at Parnell's (later Ernestine's) in Seattle. I made the Seattle trip just to see Carmen.

I also remember when I heard that she had passed. It was on a radio show on our college station KDVS. My first thought was "oh no! too soon!" I haven't sent many fan letters in my life, suspecting that many never reach the intended recipient. But I had intended to write Carmen to tell her how many hours of joy her singing had brought me. Now I never could.

Incidentally, Carol,your singing has brought me many hours of joy!

Thank you Carol. It is always a pleasure to remember Carmen. Amazing interpretation and articulation.

Thank you for alerting us on the Songbirds list that you had posted this on your blog. She was an amazing talent. Jim

Unknown said...
This comment has been removed by the author.
Thursday, 09 April, 2015

Ha. I had a laugh knowing how some people are. The ice tray indeed.
I will commit jazz heresy by saying that I have never understood Lady Day or others fascination of her. I know that Carmen was one of her most ardent fans. However, I feel that same way about Carmen. She possessed mighty skills and used them wisely and richly. I never tire of hearing they way she phrases. Even when her breath becomes labored and rough near the end of her life, her timing and clarity were absolutely mesmerizing. I appreciate your sharing your thoughts of her on your blog entry. And a further thank you for sharing your love of her on your cd "The Songs Carmen Sang." I love that VM at the end. Brilliant. (But you always are.) Much love. DAN

May I remind you of how much Ms. McRae admired you?

I recall interviewing her in her suite at Toronto's Royal York Hotel when she was appearing in its' Imperial Room...

The topic of other singers arose, and her remark remains burned in my memory: "Carol Sloane! My, how that girl can sing!"

A Person can merely enjoy two occasions relating to him/her personally.
One, is Birthday - a day in a year.
Another, is Marriage Day - A Day in a Lifetime.
Both are most precious ones, which stay memorable for a long time.

I wish you a very very Happy Birthday to Carmen.

I wish you a very very Happy Birthday to Carmen and all Birthday Wishes fill the life with joy and blessings.

Oh wow, that’s brilliant post. My husband’s 30thbirthday was on last weekend and we celebrated it amazingly. I threw a fun surprise Oscar themed bash for him at one of his favorite rooftop party New York venues. Everyone enjoyed the bash thoroughly.