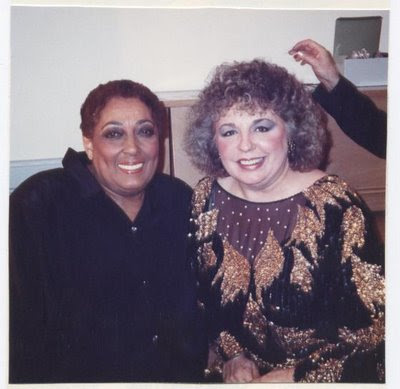 This photograph was taken backstage some years ago at Symphony Hall in Boston. I was honored to introduce Carmen so I became somewhat heavy-handed with the make-up, while she gave the capacity audience a flawless demonstration of what it means to be a jazz singer.

My first encounter with Carmen is related in this story which has been published previously. Carmen was born on this date, and an additional story of a previous birthday Ernestine Anderson and I shared with her is this one:


Carmen's Birthday
The following true story is just one of many precious memories of her I will forever hold dear.

The Japanese promoters labelled the tour "The Three Pearls": Chris Connor, Ernestine Anderson and me. We appeared in concerts and also performed singly in clubs. On this date, Ernestine and I had the night off while Chris pulled the duty with Norman Simmons playing for her.

Our hotel rooms were adjacent, and each provided mini-bars among other amenities. As girl friends will do, we sat in E's room, talking and laughing and sipping Japanese Sake. When we depleted that beverage, we repaired next door to my room for a fresh supply.

I suddenly realized April 8 was Carmen's birthday. "Let's call her up and sing "Happy Birthday", says I, terribly pleased with myself for coming up with such a thoughtful gesture. "I happen to know she's in D.C., and I know the hotel where she likes to stay. AND it's perfect timing: she'll just be getting ready for the gig.

The phone in her room rang three or four times, and then a typically abrupt "Yeah?" came through. Ernestine and I burst into a lusty version of Happy Birthday and waited to hear her laugh. Silence. Long silence. And then a low growl which escalated into a perfect screech: "Do You Bitches Know WHAT TIME IT IS???"

When Norman Simmons returned to the hotel, I told him what had taken place. He offered this profound advice: "There are three things one should never do: Never spit into the wind, never step on Superman's cape, and NEVER call Carmen McRae at 6 o'clock in the morning!"

The next day I had a headache, I paid a very expensive telephone bill, and I bought a clock that displays the world's time zones.